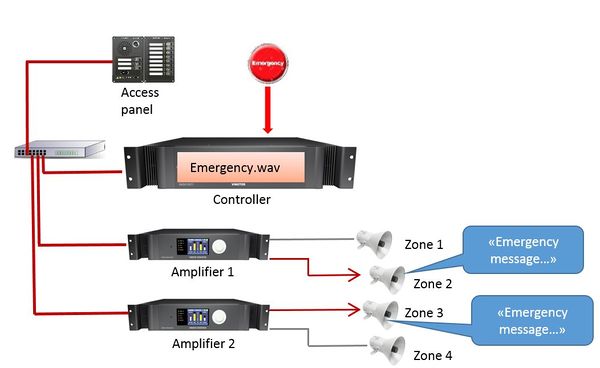 Message Control is used to dispatch prerecorded messages in the system.
This can be done from:

Prerecorded messages must be defined and uploaded to the System Controller.
Messages may be added and removed as required by the customer.

Before using this function a message (.wav file) needs to be uploaded to the controller. 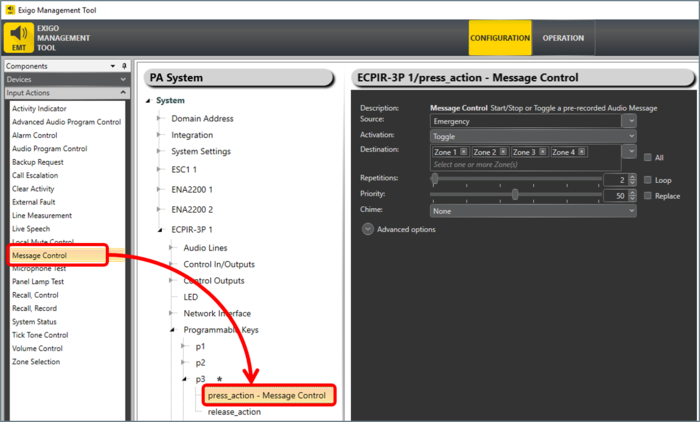 Assigning Message Control to a button

When the prerecorded messages are uploaded to the controller they may be organized in Exigo Management Tool (EMT).

For easy identification of the messages they can be renamed to a more logical name.
Renaming messages:

It is also possible to add or delete messages in the system. 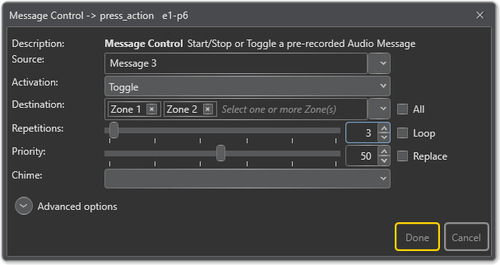 Source
The Message that should be broadcast.

Destination
The Zone(s) that will receive the message. Can be left blank if access panel keys are used for zone selection.

Repetitions
The number of times the message will be repeated. Check the Loop box for continuous playback.

Chime
The chime sound that will be played before the message starts.

Is Alarm
When set the call is of type alarm. System will enter Alarm state, 'on_alarm' state of other calls will be activated.
Event "alarm tone" will be sent for start and stop of the message, allowing GPOs to use follow alarm during release delay operation.

- This will also override the static destination list if defined.

On Busy
When one or more destination zones are busy with higher priority broadcasts, the following options are available:

If no value is chosen, a default value is used.

Release Delay
Time in seconds (0, 20 s) before the zones and resources are released after the broadcast has ended.

Escalation ID
ID used if the escalation function will be used to change parameters of this call. It is possible to add multiple ID's.

This function is available on Exigo 1.2 and newer.