Alarm Control is used to control the alarm generator. This concerns programmed alarms that can be used if a control output should toggle in accordance with the actual alarm.

Source
The Alarm source that should be controlled.

Destination
Zones in which the Alarm will be broadcast. Alarm broadcasts usually go to all zones. This field can be left blank if access panel keys are used for zone selection.

Priority
In this example for General Alarm, the priority should be set high, with only Emergency PA as a higher priority in the system. The highest priority is 1 and the lowest is 100.
Default Priority = 10.

Alarms can be organized and renamed using the Exigo Management Tool (EMT).

For easy identification of an alarm, they can be renamed to a more logical name.
To rename Alarms: 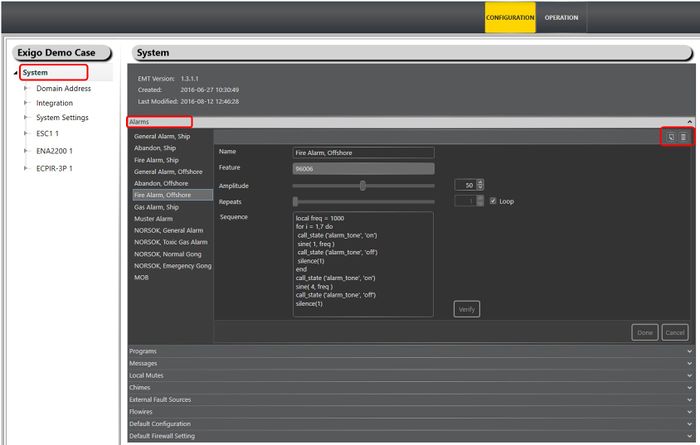 It is also possible to add or delete alarms in the system.

- This will also override the static destination list if defined.

On Busy
When one or more destination zones are busy with higher priority broadcasts, the following options are available:

If no value is chosen, a default value is used.

Release Delay
Time in seconds (0, 20 s) before the zones and resources are released after the broadcast has ended.