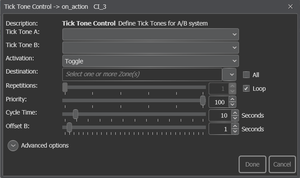 Tick Tone Control is used to control advanced tick tones in zones.
Tick tones can still be controlled from the system GUI for each channel, but Tick Tone Control will perform it for all zones, and moreover, can also define different tick tones for System A and System B respectively.

The function can be assigned to both DAK keys and control inputs. 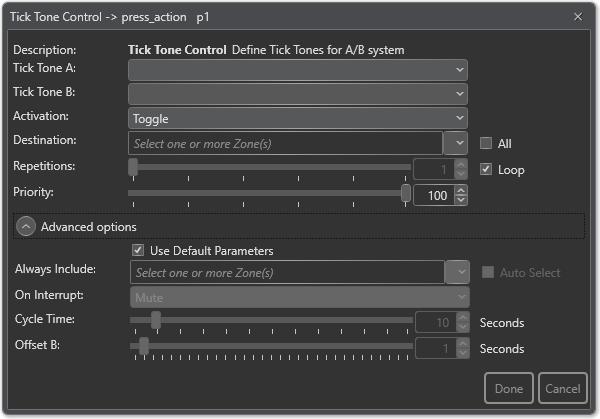 Tick Tone A
The tick tone that will be played in the system. In an A-B system, there will also be an option for a different tick tone in the B system.

Tick Tone B
The tick tone that will be played in System B (only available in A/B System projects). There are 3 types of tick tones available in Exigo version 1.2.

Destination
The Zone(s) that will receive the activity. This may be left blank if access panel keys are used for zone selection.

Repetitions
The number of times the broadcast is played back. Check the Loop box for continuous broadcast.

Priority
The priority of the activity.

On Interrupt
When tick tone is interrupted by a higher priority broadcast, the following options are available:

Offset B
Time in seconds before the broadcast is started in System B. The purpose of this is to ensure that the tick tone broadcasts do not start at the same time in both System A and System B.

Red LED indicates that the function is active.

In this case one button is designated to the tick tone function, while multiple other buttons are used for zone select.

By pressing this button the operator will allow the function to run for 50 cycles in all zones before terminating.

This function is available on Exigo 1.2 and newer.