Visual indication of faults in the system

The Fault Indication function is used to trigger the control output on faults or warnings in the system.

This can be used to send a signal to external systems such as BMS (Building Management Systems)). It can also be used to provide visual notifications when there is fault in the system.

To assign the function Fault Indication to an Control Output: 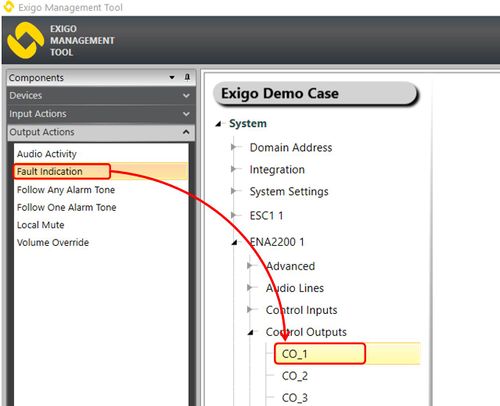 Visual Indication of a Fault in the System

In this example, the output is used to give a visual indication of an error in Zone 4.

Visual indication of errors in Zone 4

In this example, an error in Zone 4 will trigger Control Output 1. 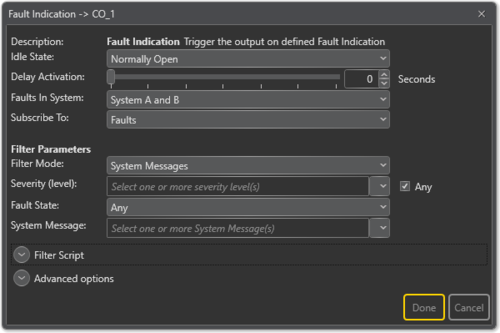 Idle State
Sets the idle state for the output. The options are Normally Open or Normally Closed.

Faults in System (only available in A-B System projects)
The system, i.e. System A, System B, or System A and B, from which faults will be received .

Filter Script field will show the actual script which will be used to determine if output should be triggered or not. This script is constructed based on the selection of filter parameters.

The system should trigger a control output connected to another system if any device is missing. Fault indication will in this example be configured as:

The system should trigger a control output connected to another system if there is a fault which affects Zone 2.
Fault indication will in this example be configured as:

The system should trigger a control output connected to another system if one of the external faults are triggered . Fault indication will in this example be configured as: