Sometimes it is useful for debugging purposes to analyse the data on the IP network. This article describes how to use the PC program Wireshark to capture data from the ethernet port of the Exigo.

In order to capture data you need the following equipment:

Wireshark (formerly known as Ethereal) is a packet analyzer (also known as Ethernet sniffer) that can intercept and log traffic passing over the ethernet port.
As data streams flow across the network, the sniffer captures each packet and eventually decodes and analyzes its content according.

Wireshark is freeware and can be downloaded from http://www.wireshark.org/.

Use network hub or switch?

A protocol analyzer connected to a switch does not always receive all the desired packets since the switch separates the ports into different segments. Connecting the protocol analyzer to a hub allows it to see all the traffic on the segment.
Managed switches can be configured to allow one port to listen in on traffic from another ports. This is called port mirroring. However, these cost much more than a hub or an unmanaged switch.

How to capture data 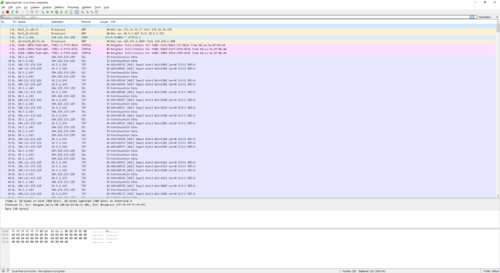